Last week I promised a post somewhat related to Martin Luther King jr. and the Civil Rights Movement. There is so much information available on the topic I had in mind that it’s been hard to provide a concise and insightful post on it. I suppose that’s a great argument for why you should be a member of the library — then you could borrow all of our resources and become an expert on the subject yourself!

When I tried to come up with an insurance topic related to the holiday, the first one that came to mind was Redlining. According to the IRMI Glossary of Insurance and Risk Management Terms it is:

An underwriting practice involving the rejection of a risk based solely on geographical location. This practice is prohibited under the laws of most states as it tends to be discriminatory to minorities.

The practice of redlining began in the 1930s though the term wasn’t used until the 1960s (if wikipedia can be believed). It literally refers to the red lines that used to be drawn on maps used for property loans. Below you can see an example of a similar map of Philadelphia: 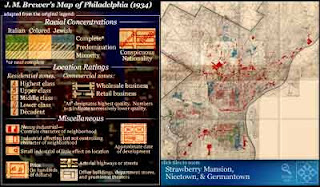 If you click on the map, you will be transferred to the UPenn website on redlining where you can click on different locations on the map and zoom in to see what it says (this is all courtesy of the Free Library of Philadelphia Map Collection). The insurance industry adopted a similar stance to that of banks and as a result it was difficult to get insurance in certain urban areas. In 1968 the President’s National Advisory Panel on Insurance in Riot Affected Areas examined the ill effect that not providing affordable insurance just based on locality was having on communities. A 1979 publication entitled Insurance Redlining: Fact Not Fiction, describes the issue by saying:”The problem of insurance unavailability is not one that randomly affects isolated individuals but rather strikes at residents of older urban communities. Insurance unavailability threatens the viability of entire communities.”

The result of the 1968 examination was the establishment of Fair Access to Insurance Requirements or FAIR plans. As Gregory D. Squires says in Insurance Redlining: Disinvestment, Reinvestment, and the Evolving Role of Financial Institutions, “I have often referred to the issue of insurance redlining as the ugly duckling of the fair housing movement.” The Fair plans established in the early 70s required inspection of properties to determine their risk level and provided minimal standards of insurance for hard to place risks.

In the years that followed that initial study, many states also adopted anti-redlining legislation. “The State of Missouri enacted one of the earliest antiredlining laws” in 1977, according to Insurance Redlining: Fact not Fiction. The National Association of Insurance Commissioners added an antiredlining section to their recommended Unfair Trade Practices Act in 1978. Their reasoning, explained in the 1978 NAIC proceedings was that

It is the position of the NAIC that the insurance industry has been perceived
to be redlining, and the perception can only be altered by implementing such
practices as stating exact reasons for rejections, cancellations and
nonrenewals. The insurance industry should also abandon underwriting
“short-cuts” such as refusing to accept an application solely because the
applicant was refused coverage by another carrier.

While I would like to report that the threat of redlining has been completely eradicated, there have been well publicized cases regarding redlining filed by the NAACP as recently as the 90s. Still, I hope that Martin Luther King would be proud of the progress that has been made.

If you’d like more information on the history of redlining, we have the items cited in this post, as well as Regulatory Challenge Business Principles Versus Social Pressures (an analysis of property and casualty insurance regulation) by Conning and Company; Problem of Property Insurance In Urban America, a Hearing Before the Subcommittee on Housing and Urban Affairs; Full Insurance Availability: Department of Housing and Urban Development and Fairness and Balance in Residential Property Insurance: A National Survey of Homeowners Attitudes. We’ve also got journal articles discussing redlining.